The Model Communities Programme was funded by Waka Kotahi NZTransport Agency to increase walking and cycling in Hastings and New Plymouth, and potentially provide an exemplar of investment in active travel programmes in New Zealand. The intervention package consisted of $3.71 and $3.57 million respectively to New Plymouth and Hastings District Councils, over the 2010/11 and 2011/12 financial years, for infrastructural changes (e.g. improved walkways and cycle lanes) and information and education (e.g. campaigns to increase uptake and the confidence of individual cyclists). The cities had different programmes, iWay in Hastings and Let’s Go in New Plymouth, but the similarities meant that they could be evaluated side by side. 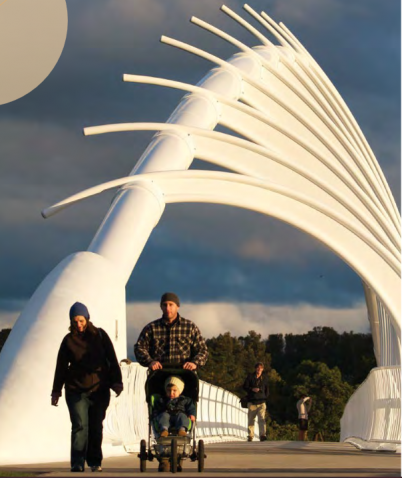 The ACTIVE (Activating Communities To Improve Vitality and Equality) study examined whether walking and cycling habits, as well as attitudes and perceptions, changed in Hastings and New Plymouth as a result of the Model Communities Programme. The study was a unique opportunity to examine the effect of a combination of structural and informational strategies on active journeys – cycling and walking.

In addition, Masterton and Whanganui were looked at as matched communities. They share some of the characteristics of the intervention cities, are similar in size and climate to Hastings and New Plymouth, and are interested in increasing active travel, but they did not have central government funding to pursue a high commitment to active travel planning. This allowed researchers to infer causality, e.g., to establish whether any changes seen in Hastings and New Plymouth were due to the intervention programmes or were part of a wider trend (in which case similar changes might be expected in Masterton and Whanganui).

Data was collected in all 4 cities in 2011, 2012, 2013 and 2016. Subsequently, Whanganui implemented aspects of New Plymouth’s Let’s Go programme, meaning that it could no longer be considered as a control. Changes observed between baseline and post-intervention in the intervention cities is compared with changes over the same interval in the control cities. This enables us to systematically evaluate outcomes, including any benefits for well-being and safety, of the Hastings and New Plymouth programmes.

Travel behaviours and attitudes were measured by in-person surveys of randomly sampled households in the 4 cities. The behaviours and attitudes of a cohort of households were monitored, providing a measure of individual response to the programme. This was supplemented by data from the Ministry of Transport’s travel survey. This enables us to address the question of how to effectively increase active travel.